Has your county caught the latest trend, the passing of an enhancement millage?  Before I get into the details of just how hot they have become, some of you might be wondering what an enhancement millage is. Essentially, a “regional enhancement millage” is levied by an ISD and distributed to its districts (traditional and PSA) to fund the operations of the district. The levy is limited to 3 mills and 10 years, and is levied on all property.  Starting with the passage of PA 23 of 2018, charter school students are also now included in the distribution.

While enhancement millages have been around since the passage of Proposal A back in 1994, they have only recently become “hot”.  Consider this, in the first 10 years of their existence (1994 to 2004), only one enhancement millage was passed, by Monroe ISD.   In the next 10 years (2005 to 2014), two passed, by Midland and Kalamazoo.  So, over the first 20 years, only three had passed.  However, in the last four years alone, five have passed. 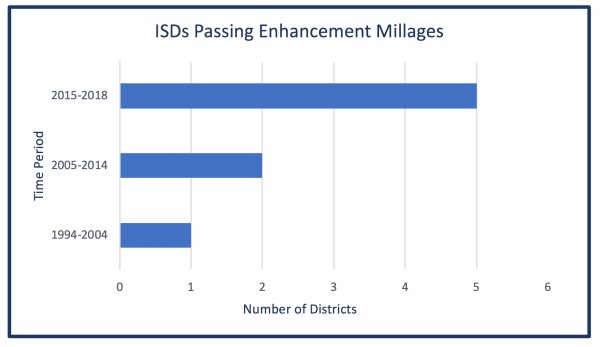 Using the same time period as above, the number of students benefiting from enhancement millages has greatly increased as well. 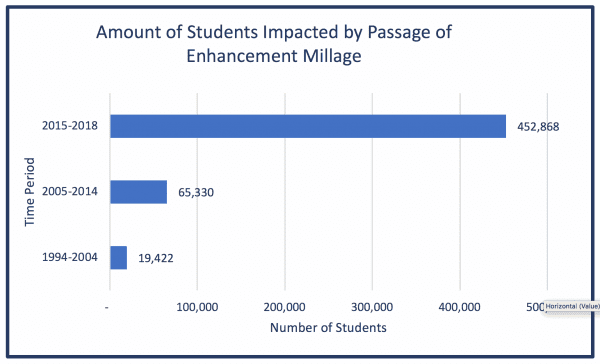 The larger number of students impacted has been made possible because larger ISDs have been successful in passing these millages.  With Ottawa’s passage this past fall, five of the top ten largest ISDs measured by LEA membership have now passed enhancement millages.  Those are, by rank, Wayne (#1), Kent (#4), Ottawa (#6), Kalamazoo (#9) and Muskegon (#10).

Of course, not all millages are created equally.  The amount of money per pupil received by districts will vary based on the number of mills levied, the taxable value, and the number of students.  And, as we all know, what a mill generates in one county isn’t necessarily what is generated in another county.  Using data from Senate Fiscal Agency and making a few calls myself, below is an estimate of the per pupil amount generated per ISD as well as the number of mills.